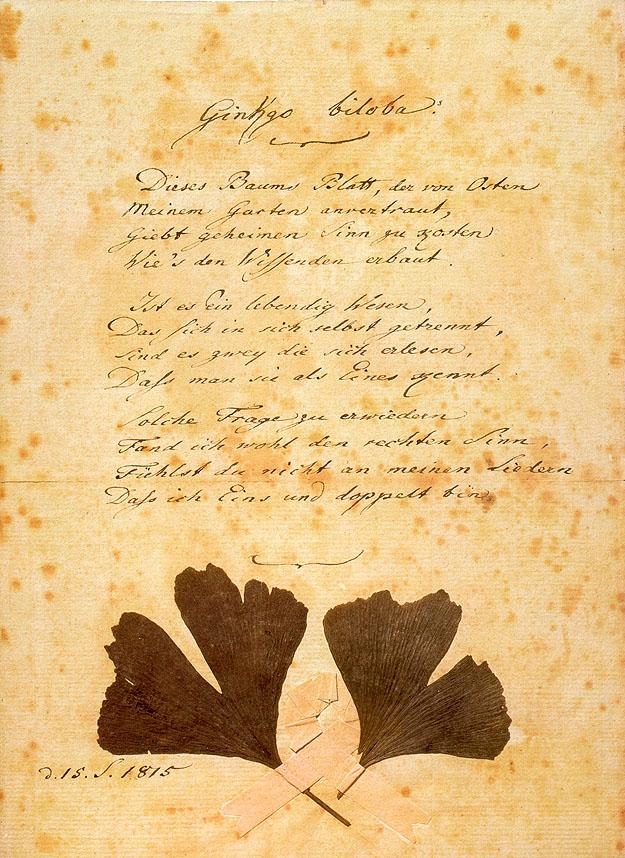 Copy of the original of Goethe's poem with Ginkgo-leaves pasted on it by Goethe himself.
15, September 1815.
Original ( fair copy) in Goethe Museum, Düsseldorf (Germany).
21,4 x 32,7 cm

Goethe sent Marianne von Willemer a Ginkgo-leaf and on  September 15, 1815 on the Gerbermühle in Frankfurt (Germany)  he read his draft of the poem to her and  friends.
On  September 23, 1815 he saw Marianna for the last time. Then he showed her the Ginkgo tree in the garden of the castle in Heidelberg from which tree he took  the two leaves pasted by him on the poem. The tree no longer exists. After that he wrote the poem shown above and sent it to Marianne on September 27, 1815.
So the date '15.9.1815'  only refers to his evening on the Gerbermühle.
The poem was published in his work 'West-östlichen Divan' (Book 'Suleika'), first published in 1819. Suleika is Marianne von Willemer. In  his work Goethe changed Ginkgo into Gingo for literary reasons (East ->West?).