Kaempfer's notes and manuscripts are kept in the British Museum. He also made notes about the use of the seeds: they were roasted and eaten as a  delicacy and for health and longevity. The seeds - painted red - also function as a weddinggift  and are  used on special occasions.
The name Ginkgo was first used by Kaempfer (read my Name-page).
The Adiantum monochlamys fern was collected by Kaempfer at Hakone near Mount Fuji in Japan. It is said he mentioned that the fern was used to help a woman to maintain good health before and after giving birth.


With thanks to Prof. Wolfgang Michel-Zaitsu, Faculty of Languages and Cultures, Kyushu University,  Fukuoka-City (Japan) for sending me copies of the above pages 811-813 (and cover below) from "Amoenitatum Exoticarum". His website has the most comprehensive bibliography on Kaempfer available: http://rc.kyushu-u.ac.jp/~michel/ 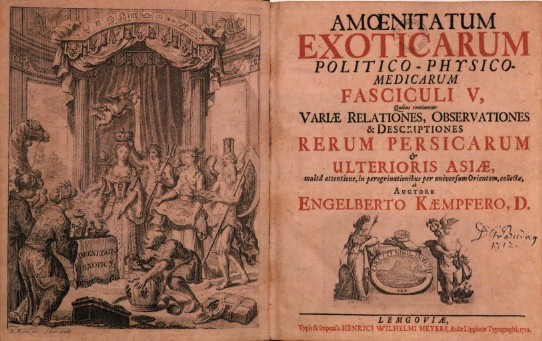 Translation of the Latin text:

Ginkgo or Gin an, vulgar Itsjó

A nut-bearing tree with Adiantum (= Maidenhair fern) similar leaves. It reaches the stately size of a walnut tree; has a long, straight, thick trunk with many branches and an ashgrey, cracked crust rough when aging. Its wood is light, soft and weak, its heart is soft and spongelike. The leaves grow alternately on the branches, single or several (three or four) at one place; their stalks are an inch to one handbroad long, squeezed together at the topside and flow over into the leaf.  The leaf is small at the beginning, becomes however after a short bit three or four inches broad and resembles thereby the leaf of the Adiantum; its outer edge is arc-shaped, irregularly incised and in the centre deeply cut; it is thin, smooth, hairless and  darkgreen of colour, becomes however yellow in autumn, with a pass to red-brown;  it is striped with fine nerves all through and has otherwise no fibers or nerves;  the leaf is aequifazial (both surfaces are alike), but at the beginning incised above.

In late spring appear rather long, hanging catkins with many pollen on the branches of the crown. On a fleshy, strong stalk, which is an inch long and comes out from the same "cluster" as the leafstalk, hangs the fruit; it is completely round or oblong round, has the form and the size of a Damaszener plum and an uneven, with time yellow becoming surface.  The fruitcoat is fleshy, juicy, white and quite hard;  it sticks to the nut which it encloses, so that this cannot come out; it is then one lets the fruitcoat decay in water and then squeezes the nut out, as one also does with the Areca catechu (Betel nut).

The nut itself is called Ginnaù (misprint, correctly Ginnan) and resembles a pistachenut (in particular those, which the Persians call "Bergjès Pistài"), is however almost twice as large.  It has the appearance of an apricot core and possesses a thin, frail, whitish woodish shell;  in it is loosely situated a white, unstructured kernel, which blends the sweet of the almond with a bitter taste and is rather hard.

Eaten after a meal , the kernels are to promote digestion and to slacken the from eating blown up belly again;  therefore they are never missing in the dessert of a sumptuous meal. They also serve as an ingredient in several dishes, after one took away its bitter taste by cooking or roasting .  The nuts are quite inexpensive:  A Belgian Pound (approx. 480 g) costs about two Drachm (approx. 7.5 g) of silver.

Translation of this text into German, French, Spanish, Dutch.