Two of the oldest Ginkgo biloba trees outside Asia are growing in Europe.
The tree in Utrecht (the Netherlands) is seen as one of the oldest, but the tree in Geetbets (Belgium) is thicker....

The male old Ginkgo in Oude Hortus in Utrecht (the Netherlands).

* Utrecht has the Ginkgo seen as one of the oldest trees outside China and Japan, planted between 1730-1767? as a young tree or grown from seed taken to Europe by VOC-ships from the Isle of Deshima (as a result of Kaempfers discovery of the Ginkgo). This manmade isle looks like the outline of a Ginkgo-leaf! However Linnaeus doesn't mention this Ginkgo, although he visited the hortus in Utrecht several times between 1735-1737. Maybe it wasn't there or he didn't know how to classify it; this must have been a problem for the first time he mentions a Ginkgo is in his Mantissa Plantarum of 1771. It is also not listed in the hortus' catalogue of 1747. In 1780 prof. Nahuijs sent a complete list of all plants and trees in this hortus to Thouin of the Jardin Royal in Paris, but again the Ginkgo is not listed. The only prove (?) of the planttime of around 1730 is the visit of the German botanist Ehrhart in 1787 to this hortus, for he describes this Ginkgo to be some 4 meters tall (but that is not very tall for a 57 year old tree).
The Belgians think a Ginkgo in the Belgian place Geetbets in the garden next to the church (near Hasselt) is at least as old, because it is thicker (I saw this tree and also the Ginkgo in Utrecht and I got the impression the Belgian tree has suffered more environmental stress and traumatic events), but there is no prove of this althought their girth differs.... Judge yourself by viewing the pictures I made  of the two probably oldest Ginkgos outside Asia in Utrecht and Geetbets.

In 1814 a female Ginkgo was discovered in Bourdigny (near Genève) originating from a nursery in England. It took almost 100 years before it was known that the Ginkgo was dioecious. The Utrecht Ginkgo is male. Probably in c. 1830 a female branch was grafted on it at about 10 meters height. This was not discovered until 1918 when it was bearing seeds! 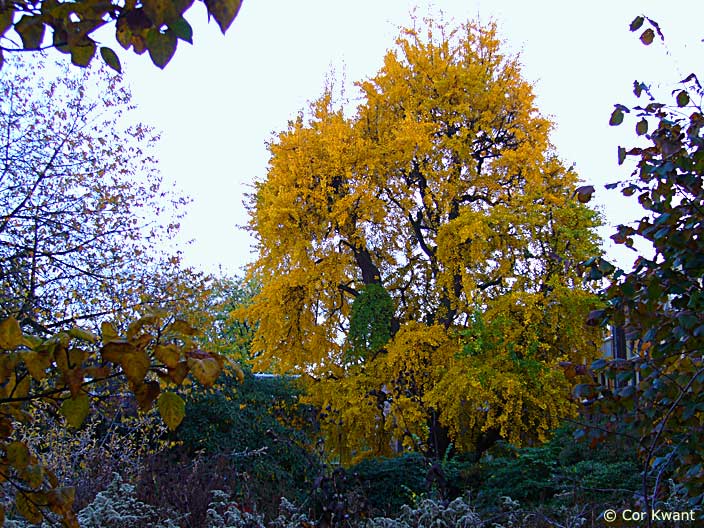 Girth 4.96 m (in 1993 at 1,5 m from ground level). Probably taken to Belgium by missionaries (?) from China.
Tree has been damaged by lightning and was treated by a tree surgeon. 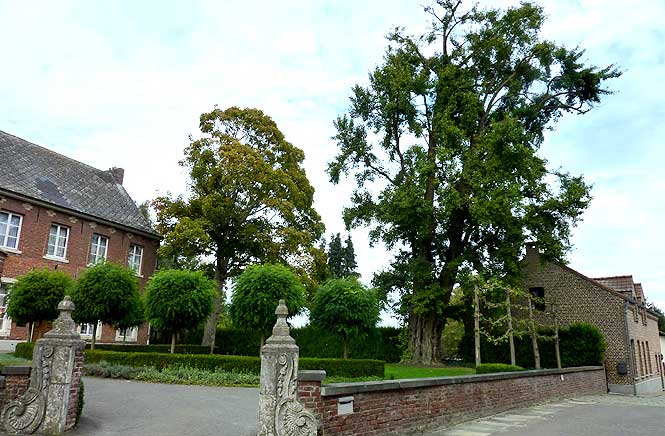