The Chinese characters are explained in Japanese as ginkyô. Undoubtedly Kaempfer's Japanese assistant(s) who explained the characters readings to him pronounced them in the correct way. Y/g: in Kaempfer's handwriting the y differed significantly from the g. As both syllables kyo and gyo are consistently written as kio/kjo and gio/gjo by Kaempfer in his manuscripts one might expect he should have written Ginkjo or Ginkio instead of Ginkgo. Back in Lemgo there was no way to check the validity of his notes on plant names taken in Japan. Therefore the wrong writing Ginkgo was transferred from his notes into the "Amoenitates Exoticae".

*  Another possible explanation of the unusual spelling of Ginkgo is found in an article by Nagata (Hosei University), Duval and Crane (Yale University) in Taxon of February 2015:
Kaempfer's assistant was Genemon Imamura Eisei, a native of Nagasaki. Analysis of both "Kinmôzui" and "Amoenitates Exoticae" indicates that Kaempfer faithfully followed what his interpreter pronounced, using the local dialect of medieval Nagasaki in plant names.


biloba: two-lobed; bi from Latin "bis" meaning double, loba meaning lobes. The leaf is fanshaped with a split in the middle, hence two-lobed. 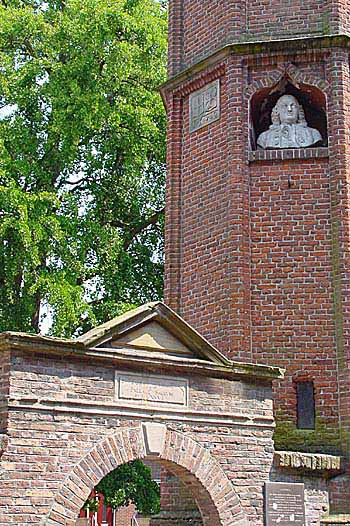 De Hortus, Harderwijk, the Netherlands: Linnaeus and the Ginkgo.
This Ginkgo is said to be planted in 1735 by Linnaeus.
More info and photos click here

Ginkgo biloba L.: The "L" meaning Linnaeus who named it Ginkgo in his classification in 1771 adding "biloba". E. Kaempfer first called it "Ginkgo" in 1712.


Synonyms: Salisburia adiantifolia. The English botanist Smith (1797) proposed this name to honour Richard A. Salisbury, another botanist. The internationally accepted classified name Ginkgo biloba by Von Linné could not be changed however, so it remained a synonym.
Pterophyllus salisburiensis, Nelson 1866.

Tree of Forty Gold Crowns: the leaves turn a beautiful gold colour in fall and/or the Ginkgo was very expensive to buy in former times.

Wish Tree: Artist Yoko Ono (widow of Beatle John Lennon) planted a Ginkgo in Detroit. Her message: "Wish Tree for Detroit (Michigan). Whisper your wish to the bark of the tree. Yoko Ono, 2000." "I believe we can create a more positive future through wishing", Yoko stated.

Peace Tree: In New Bedford (Massachusetts,USA) there's a UN Peace Tree as a community symbol of hope for world peace: the Ginkgo. It was planted in 1955 by schoolchildren as a gesture of hope that all governments would join the United Nations and work toward world peace.