The fossil findings show that the Ginkgo prevailed under moist and moderately warm climates since the Mesozoic era.

In the oldest Chinese literature the Ginkgo is not mentioned, but in the 11th century (Sung dynasty) it appeared in the literature as a plant native to eastern China. In a poem by Ou-Yang Xiu is written: "Ginkgo grows south of the Yangtze River, the name coincides with its substance. Since the nuts have been used in tribute, then it is considered precious in the Capital. " In a notebook of the Sung dynasty (Shi Hua Chung Kuei) is said: "In the capital (Kaifeng) there was originally no Ya Chio (Ginkgo). Since Prince Li Wen-ho (1st half 11th century) came from the south and transplanted it to his residence, it became famous. From then it gradually propagates and multiplies, and fruits from the south are no longer considered precious." From that time on the Ginkgo is depicted on Chinese paintings and appeared in poetry. Ou-Yang: "The first 3-4 seeds this Ginkgo produced were presented to the emperor in a golden bowl. After a few years the trees bear more fruits. The owner presents the nuts like giving pearls."
Many famous poets praised its 'fruits'and sometimes also its leaves. Especially the poets Ou-Yang Xiu and Mei Yao-ch'en, who had both official positions in the capital Kaifeng, exchanged verses about the Ginkgo when Mei moved to the south near the Yangtze River. Mei sent seeds from a tree in his own backyard to Ou-Yang Xiu.
The seed is often compared with the walnut by Sung-poets which was a popular fruit of the north.

The Ginkgo might have been known to the northern Chinese before the Sung dynasty but it was very rare and not in cultivation. According to the Contemporary Ginkgo Encyclopedia of China the edible nuts were a food source since at least the Han dynasty (206BC-220AD). The seeds were not mentioned in herbals until the Yuan Dynasty (1280-1368) in Li Tung-wan's 'Edible Herbal' (Shih Wu Pen Ts'ao) and the 1350  work, Wu-Jui's  'Herbal for Daily Usage' Jih Jung Pen Ts'ao. In Pen Tsao Kang Mu  (1578) is mentioned that the nuts are  consumed at weddings (the shell being dyed red), are much used at feasts and are a fair substitute for lotus seeds ( Stuart/Porter Smith).
After the Sung  and Yuan dynasties Ginkgo seems to be widely cultivated all over China. There seems to be no association with religious institutions; it has always been the custom of the Buddhist as well as the Taoist priests to preserve venerable species on temple grounds. Very old trees are often revered and preserved because of age and not kind.
The Ginkgo is also mentioned in the botanical work Chih Wu Ming Shih Tu Kao of 1848.
The famous writer and historian Guo Moruo published an essay in which he mentions the Ginkgo a wonder and the victory of humanity over nature.

The Ginkgo nuts are mentioned in Japanese textbooks from 1492 and later for use at tea ceremonies as sweets and dessert. In the Edo-period (1600-1867) common people began to eat them as vegetable and ingredients for pickles. In this Edo-period Ginkgo trees were connected to shape-shifters and spirits and not planted in gardens (possible influence of the assassination of Minamoto no Sanetomo under a Ginkgo tree near the temple of Tsurugoaka in 1219).  In the 18th century the nuts (called ginnan) became used as a side dish when drinking sake. Today they are used (grilled or boiled) in chawan-mushi (a pot-steamed egg dish) or in nabe-ryori (Japanese fondue). The grilled nuts are still often eaten in Japan when drinking sake.

The earliest record of the use of the leaves as a medicine is said to be mentioned in the Chinese Materia Medica Shen Nung Pen Tsao Ching (which should originate from about 2800 BC or from the Han dynasty [206BC-220AD]) as an aid for blood circulation and the lungs. This record cannot be confirmed however  because the original of this work has never been found.
Dian Nan Ben Cao (Lan Mao) (1436) mentions the use of the leaves for skintreatment, head sores and freckles. They are also used for chilblains and as a wound plaster.
The internal use is first mentioned in the Ben Cao Pin Hui Jing Yao (1505) by Liu Wen-Tai as used against diarrhea.
In 1932 the Japanese Furukawa isolated the ginkgolides for the first time, which were further investigated for their chemical structure by Nakanishi in 1966.


From Henderson's Handbook of Plants and Horticulture by Peter Henderson, 1890:

From an interesting notice of this remarkable tree in the "Philadelphia Ledger" August 29, 1889, remarking on its fruiting for the first time in that city, in the grounds of Mr. Charles J. Wister, Germantown, and communicated to us by Mr. A. Garman, of Philadelphia, we make the following extracts:

" The tree itself has a very remarkable history. It is asserted by eminent horticulturists that it has been found wild nowhere on the earth, but it is cultivated largely both in China and Japan, where it is usually found near the temples and similar religious structures.

" The paleontologists and evolutionists are also much interested in the Ginkgo although, as already stated, no wild localities are known where the trees grow, it has been discovered by its fossil remains to have been once widely scattered over the face of the globe. It is probable that it is only through its having commended itself by its beauty and other good qualities to the Chinese and Japanese gardeners, that it has been able to survive those geological cataclysms under which the old race has been cleared away from the surface of the earth. It is classed with the coniferous trees, notwithstanding its fern-like foliage, its closest relation being the yew family; but as there is nothing very closely resembling it, the paleontologists believe that an immense number of what have been is wholly swept away." 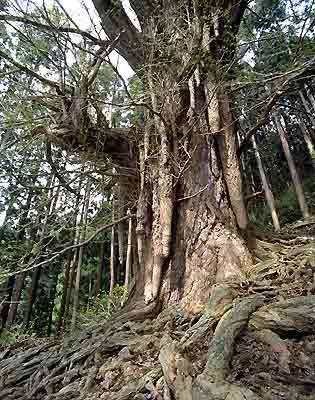