This page is about:
Classification|Form|Wood|Leaves|Culture|Planting|Gender|Bonsai|Selections
+ videos

During the time of the dinosaurs seed plants (spermatophytes) were well developed and were the most dominant vegetation on earth, especially the lush seed ferns, conifers and palmlike cycads. These primitive seed plants are called gymnosperms (meaning "naked seeds") because their seeds are not enclosed in a ripened fruit but are protected by cones or by a fleshy seed coat.


Because of its unique position botanists found it difficult to classify the Ginkgo. Therefore the Ginkgo has been placed in a separate group in recent years, the division (phylum) Ginkgophyta.
This division consists of the single order Ginkgoales (Engler 1898), a single family Ginkgoaceae (Engler 1897), a single extant genus Ginkgo.
Click here for the classification scheme

There are two extinct genera: Ginkgoites and Baiera (known from fossilized leaves).
The only living representative of the order Ginkgoales is the Ginkgo biloba.

The extract of the dried leaves is popular for their use as a diet supplement and/or herbal medicine (prescribed in Europe) for the brain, legs, eyes, heart and ears. Scientific studies show that good extracts may improve bloodcirculation and memory, prevent bloodclotting, damage by free radicals and give an improved sense of well-being and can be used for many other disorders. The leaves are also used as tea for a variety of ailments.

The fungus Bartheletia paradoxa is a living fossil like Ginkgo biloba and grows on fallen Ginkgo leaves (it is not present on leaves on the tree), it does not grow on other plant species.

Read more about this on my Usage-page.

Nearly every arboretum or botanical garden will contain specimens. The supreme specimens are to be found on temple grounds in China, Korea and Japan. In China they also grow in forests and valleys on acidic, well-drained sandy loam (pH 5-5.5) and they are cultivated below 2,000 m (see Where-page).

Ginkgo has survived in some areas of China where the impact of glaciation was minimal. Populations of Ginkgo biloba are found across the country, but are generally associated with human activities.
Questions about the extent of Ginkgo bilobas native range in China have been the subject of debate among botanists for well over a hundred years.
DNA analyses (Zhao et al., 2019) have demonstrated that Ginkgo populations occur in refugia in southwestern, eastern and south China.
More info on my History-page.

For places where the Ginkgo has a special growing spot see the page Where on my homepage.

The Ginkgo can have a long life span, in China the oldest Ginkgo is about 3,500 years old.  Research (article by Li Wang et al., PNAS 2020, lit.page) shows that the Ginkgo tree is almost immortal, genes in the cambium contain no program for senescence (ageing) or death. The vascular cambium in Ginkgo biloba can retain the capacity for continuous growth for over 1,000 years or even millennia. Old trees bear just as many viable seeds, pollen and leaves as young ones.  The immune system in these trees, even though they are 1,000 years old, looks like that of a 20-year-old.
Its longevity is due to disease resistance associated genes that produce protective chemicals to fight off stresses caused by diseases or other environmental stressors. These include anti-oxidants, plant hormones and antimicrobials, among which flavonoids.
However it is possible that if the division rate of cambial cells continues to decline after thousands of years, tree growth could slow, and the tree might eventually die of old age.
Most trees however are unlikely to die from old age, most die from external factors.


The majority of ginkgos live as a hardy ornamental tree and, being nearly cosmopolitan, specimens are planted around the globe in almost any temperate and subtropical areas. In the USA only 0.2-2% of the total number of roadside trees is a Ginkgo, in Europe this is even less (1992). The tree is farmed extensively (esp. for its medicinal use as a herb) in Europe, Japan, Korea and the USA.

In China Ginkgo trees of more than 100 years old are listed as second class protected plants of the state. Roads and buildings should give way in order to protect them well. 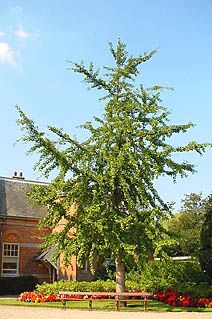 Some people think there's a good opportunity to plant a Ginkgo tree on special occasions like the death of a beloved one, the birth of a child, an anniversary, moving house etc.

Planting: It prefers full sun to partial sun and moist, deep, well-drained soils (preferably sandy loam), but is very adaptable, so it also grows in poor soils, compacted soils, various soil pHs, heat, drought, salt spray in winter and air pollution. Fertilize 1-2 times a year. Don't mulch with shredded bark round the trunk, keep it airy. It roots deeply (photos of root system). The roots of most Ginkgos are infected by vesicular-arbuscular mycorrhizae (VAM) that play an important role in the uptake of the element phosphorus.

They look like cherries. It takes about 20-35 years before they appear for the first time in spring. Catkin-like pollen cones (microsporangia) containing the sperms on the male tree also grow on short shoots in spring (also after about 20-35 years) and the pollination usually takes place via the wind. The female tree can carry seeds without pollination (sterile). Variations in the cycle of pollination, fertilization and seed abscission in Ginkgo are mainly due to the latitude and the local climate of the region in which the tree is growing.

The seed has a silvery shine ("silver apricot/nut"). The ripened fleshy seedcoat when falling on the ground and decaying has a 'disagreeable' odour (like rancid butter) as a result of the presence of butyric (butanoic) acid, a common byproduct of many plants and animals (the same compound that in small quantities is used in perfumes) and can be very messy, making the female trees unfortunately less popular for planting in pedestrian areas. This period doesn't last long however and much 'trouble' can be prevented by cleaning up the fallen seeds regularly etc. In countries like Korea, Japan and China female trees are preferred because the people appreciate the nuts! More information about the 'smell' of the seeds: click here.

The propagation can also be done by cuttings (the best way to ensure the gender) or by grafting a female branch onto a male plant or visa versa.

Read further about this on my Propagation-page.

The fresh nutritious seeds (also canned with fleshy outer coat removed) are sold in markets esp. in the Orient.

The "nut" has for long been used in Chinese medicine for asthma, coughs with thick phlegm, bronchitis, digestive aid and urinary incontinence etc.

Read further about this on my Usage-page.


Bonsai
I made a special page about the Ginkgo as a bonsai tree.
Click here to go there.

HD-video: one of the oldest Ginkgo trees outside Asia
Geetbets, Belgium, c. 1750

Many garden centers sell the Ginkgo biloba. Special cultivars are for sale at nurseries.
The Ginkgo can often be found in the conifer catalogue (check out my Links-page and/or try search engines). Male trees are  often propagated from cuttings. Always buy from a reputable firm. Of course I would very much like to have male and female trees in my own garden, but I only have space for one big tree....
If you have a suitable spot then please plant a female tree or grow Ginkgos from seed (can become male or female tree), because they are so rare and when only male Ginkgos are planted it cannot survive without human intervention.
The Ginkgo is listed in the IUCN Red List of Endangered Plants.

The Ginkgo tree can grow large, therefore it is not the tree for every backyard. Selections are made to make it suitable for places with less space and also to meet with desired shapes etc. Upright, dwarf, narrow and conical, pendulous and variegated cultivars exist, search for them on the internet, ask for them at garden centers and nurseries. Cultivars  are mentioned below (but there are many more!).

Visit my Blog - Forum: many posts about the Ginkgo, photos, videos
and reactions to questions by readers (or ask a question yourself):